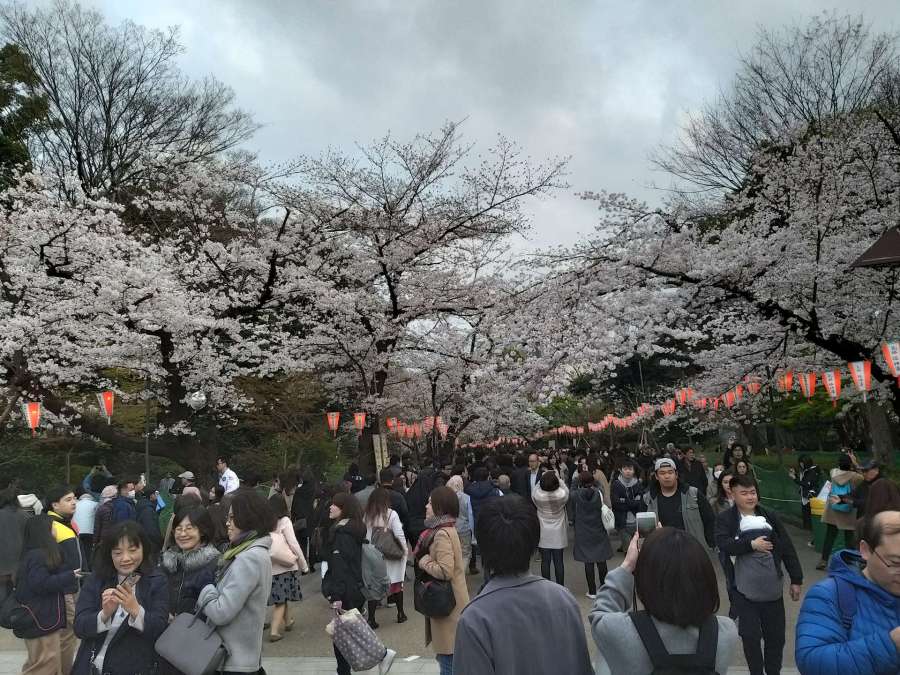 Welcome to the A lot for a little series! Here I’ll post reviews and ideas of things to do in Tokyo and Japan that are fulfilling and not necessarily expensive, in true frugal fashion.

Early April is Sakura blossoming season in Japan, and the Japanese have a tradition of going on hanami 花見, literally “flower viewing,” where families and friends gather on parks under the full pink trees and have picnics and celebrate the coming of spring, the renewal of life for the rest of the year. This is a signature event of Japan, and many tourists book their flights on spring for this period specifically

Hanami during spring is a great thing to do because it combines all aspects of the ideal frugal leisure:

Many of the bigger parks in Tokyo have a great infrastructure to host a picnic as they are safe, accessible and have good bathrooms and food and drink vendors on the side. And as a last resort, usually there are many convenience stores around if you need to resupply.

As beautiful as the even is, however, too many of the most famous parks get way too crowded due to their legacy as a hanami spot. So, unless you like bustling crowds, my advice is to seek a smaller park for a quieter and more private event with friends.

Wife and I headed out this weekend on Hanami due to a tip that the flowers were on full bloom and not going to last long. The weather wasn’t very great – grey sky all day, sort of windy – but at least it didn’t rain, so we were able to enjoy it the whole day. We went to Ueno park on Saturday, followed by Tatsumi on Sunday. Here is the blurb.

Ueno Park: most interesting, but too crowded

Ueno is a district located in Taito-ku, northeastern Tokyo, and heart of the Tokyo’s Edo shitamachi culture. Famous for the Ueno zoo and the metropolitan museums around it, it’s a cultural hub with a huge park around it. The Ueno park hanami is probably the most famous one in Tokyo.

Unfortunately, that also makes it one of the most crowded and hardest parks to get a spot in, with thousands flocking to the park during March and April and flooding the sidewalks with picnic sprawl. Just getting out there past 10AM, there were already no empty spots on the sidewalks and green areas. So, the advice for planners is to get in there early, and I mean early.

In my opinion, Ueno park really shines on other times when there are no events in it. Fairs and expos happen year-round, and, unlike other big parks like Yoyogi, there are many things besides the park itself to see and do: three museums and the Zoo for starters. In addition, food vendors and cafes are available inside the park, so you can resupply easily, unlike other parks where you have to bring everything in. You could easily come back here more than once.

Tatsumi: lesser-known, but quiet and cozy

On the other side of the spectrum, we “discovered” this quiet, but beautiful park in Tatsumi, Koto-ku, in a short distance from where we live.

Located 5min walking from Tatsumi station, between busy Toyosu and Disneyland, this park is really a hidden jewel. Unknown by most foreigners (even us!), it’s not as big as Ueno or the others, but the coziness makes up for it. There was a crowd, but not anywhere near as big as Ueno or the others, which struck as the perfect balance. Plenty of space to have a picnic or play with the kids and, at this time of the year, a good selection of game and food stands to keep the matsuri spirit up.

A neat thing about the park is that it’s close to two big swimming centers. One of them is an older building, probably used for smaller, local events, but it looks like the another one still being built specially for the Olympics. Looks like we will see a good increase in movement during next year!

A way to a nice getaway without the costs

If you’re planning to come to Japan, or are already living here, the period from late March to early April is the finest place to see the spring blossoming and have a picnic at the park. This is the right time to get to know some parks, hang out and take beautiful pictures, since when summer rolls in the weather gets waaaay too hot and humid for you to stay outdoors anywhere anyway. But maybe we can talk about how to deal with this other problem in another post.

Enjoy the great weather and the beautiful season in the meantime!

2 thoughts on “A lot for a little #1 – Hanami: have a picnic under blossoming Sakura in Tokyo spring”

I run a personal finance / FIRE blog in Portuguese here:

The content in this site is offered under a Creative Commons CC-BY-SA 4.0 License. Permission to reuse this content is granted as long as attribution to the author is expressed.